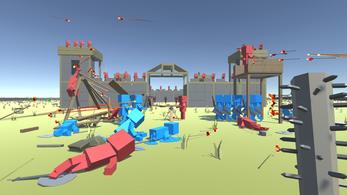 Well, there a new review of Indie game, for you, on itch.io!

Why I have downloaded it?
Hm, a good question.
I have done it because, I have seen so many similar battle simulators and thought, that it would be funny to playing it for free 🙂

Awful handling makes it very difficult to play. I would say – you schould be drunk to play it realy good.
Enemies, that you would “meet” there, are just stupid, as allies.
That is good for you, but after some minutes of playing with them, its not funny any more.
One other thing, that would make you unhappy, is fightning balance.
Ther is no balance there at all – lots of enemies and very few allies are on the same place or just opposite.

If you like to play as archer, sorry guy, they’re useless and uncontrollable.

Guys, this game only have realy nice and colorful screenshots. And its only one of many other points, that I would like to see in this type of games.

I won’t play it second time. Well, only if someone would pay me for that.