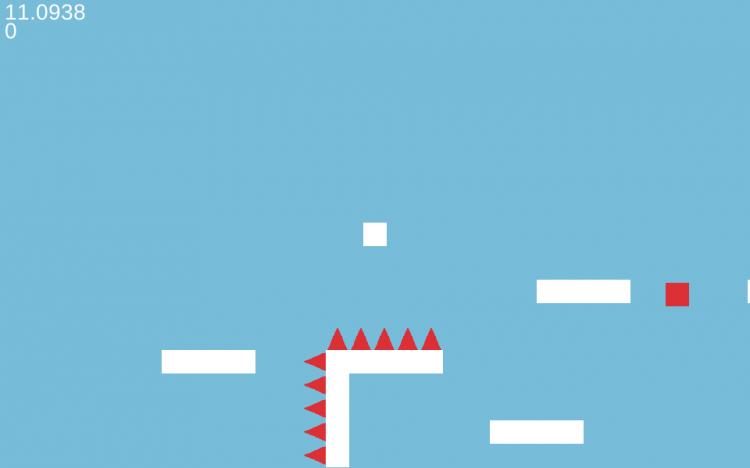 This week was quite upsetting, considering my recent visits to doctors. My health condition is quite bad and Russian free medicine is useless as hell, I don’t know why I keep paying taxes for this shit. Just small lyrical digression.

What I’ve spent my last 168 hours on? Mostly on sleep. But, I’ve got something interesting for ya, guys. And it’s reveal of my current game project.

It’s goin’ to be new minimalistic platformer, made mostly for mobile. I’m making it in coop with one of my old friends, where I’m programmer and gamedesigner and he makes all graphical and content stuff. Another pair of hands would be useful. If you want to help – email me or write in Twitter with quick desc of your skills. Game is being developed using Unity

Okey, to the progress of development.

Most recent gameplay gif. Anything is subject to change

Firstly, we planned to make really simple platformer with loading levels from remote server, which would contain full information about level objects, providing us great versality for unleashing our creativity, but later I decided to remove almost complete Level Loading system and simplify game as much as I can to release it faster and then update with new mechanics and levels (in case of successful release and at least some players).

Now we have fully working prototype with main mechanics and some insight on future graphical style. Both of us really liked idea of minimalistic design with few colors and use of basic geometry for objects, which gives our game feeling of simple and light gameplay and it don’t cause too-many-colors syndrome, you know.

To complete the level player must collect all flying gold bricks, which we call “Coins” as they were intended to work, but during brainstorm anything changed. Replacing single “winning point” with multiple coins allows us to provide player difficult multi-directional levels with many ways to explore, not just left-to-right gameplay (like one in Mario).

All this considered, we are still open for ideas of new mechanics as game tastes too raw. If you have some – feel free to contact me. Btw, now we are working on all sort of new level objects and some UI improvements, like on-screen coin counter.